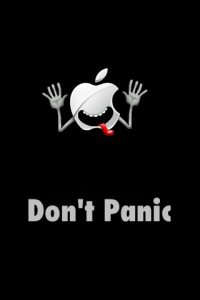 I think this blog is past due for another installment of Famous Paintings Discussing Current Events.  As regular readers of this blog can attest, well-known portraits will occasionally drop by and express their views on trending news items.  Really, in times like these, what we need is the wisdom and insight that only peerless works of fine art can provide.  No, Donald Trump’s hair does not count, though it is certainly a masterpiece (master piece?).  I checked in with some of the leading paintings and found that what was foremost on their minds was the battle between Apple and the FBI.

What battle, you ask?  For those of you who have had absolutely no access to any kind of media for the past several months, a) how are you reading this blog? and b) here is the background on this issue  (if you know the background, feel free to skip down to where the famous paintings start talking):

After Edward Snowden disclosed that the NSA had access to user data on iPhones and could read almost all of the information on the phones, Apple developed such strong encryption for iPhones that Apple itself can’t extract the information from the phone if it’s locked.  This led to the pending court case in which the FBI obtained a court order requiring Apple to create a new operating system that will allow iPhone security features to be disabled.  Apple refused, arguing that the government should not require Apple to create a program that undermines the security of its own product.  The iPhone in question was a work phone used by one of the shooters in the December 2015 attack in San Bernadino.  The phone may or may not contain, among other things, information about a possible third shooter.  The FBI recently asked for a delay in the court case because an Israeli company may be able to hack the locked iPhone, thus exposing a potential security flaw while giving no indication to Apple or to millions of iPhone users as to what that flaw may be.

Now that we’ve got that out of the way, here’s what famous paintings have to say about it:

American Gothic:  Have you heard about the latest development in the court battle between Apple and the FBI?

Old Guitarist:  I’ve been following the case.  I can’t believe the government actually got a judge to order a private company to create a program that would weaken the company’s flagship product.  What’s next?  Is the NEA going to get an injunction to have someone repaint my guitar and make it electric just so they can hear me play Stairway to Heaven?

The Scream:  It’s outrageous!  Big Brother won’t be happy until all activity on every smartphone, tablet, and computer is automatically reported to the newly-formed Department of Douche-Baggery.  How dare they!

Whistler’s Mother:  Your position on this issue wouldn’t have anything to do with those pictures I found on your laptop the other day, would it, dear?

Old Guitarist:  Yes, clearly what we need in such urgent situations is a protracted legal battle.  It will be so useful to find out four months after an attack that the shooter was a frequent visitor to LOLcats.

American Gothic:  What puzzles us is the FBI’s latest request for a delay because they may be able to hack the iPhone.  If they could hack the iPhone, why go to court to make Apple create a new operating system?

Mona Lisa:  I think it’s smart for the FBI to keep trying to extract the information from the phone in case the court case goes against them.  What I want to know is, if they do find a way to get into that phone, what’s going to keep them from hacking into my iPhone?  I have some very compromising portraits on it.

Old Guitarist:  Hmm.  Suddenly I’m not quite so opposed to the FBI’s actions…

The Scream:  This whole situation has me so worked up.  It makes me want to shout, or holler, or just…somehow…make noise….

Girl With Pearl Earring:  This is why we should elect Trump.  If we build that giant wall on the Mexican border and stop handing out green cards to terrorists, we won’t find ourselves in this situation any more.

American Gothic:  It’s nice that you’ll always be pretty, dear.  That will come in handy.

As always, all opinions are those of the paintings themselves and not those of the blog.  Is anyone else wondering if those compromising portraits on the Mona Lisa’s phone might shed some light on the meaning behind that famous smile?  And Old Guitarist, what a roué.  I would totally pay to hear him play Stairway to Heaven, wouldn’t you?  Due respect to Jimmy Page, whom I revere as a god among men, but Led Zeppelin as interpreted by Picasso sounds awesome!

For the waiting, who asked for a post on frogs.  There are so many apps and games featuring frogs in all sorts of undignified settings; I think it’s high time the frogs got a little of their own back.

I can’t wait to see what happens with Angry Birds!  Also, does anyone else get the idea that this is the frog that was supposed to be their prince?