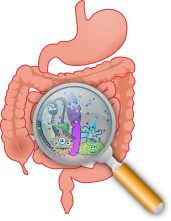 Like with many people, my digestion has gotten a lot more talkative as I’ve gotten older.  We don’t usually have extensive discussions unless I go to the seafood buffet, but I’ve become fluent enough to carry on a basic conversation in Gurglish (that’s what I’ve named the language of my alimentary canal).  My small intestine, which is the chattiest of the bunch, likes to wait until I’m out in public and then tell me long stories about how much better things used to be in my gastrointestinal tract, with the other organs chiming in for emphasis.  Here’s how the major players in my digestive system tell me it used to be in their salad days:

Stomach:  Look, I’m not saying it’s not awesome, I’m just saying, we’ve had milk for the last two hundred and seventy three meals.  Couldn’t we change it up a little?  Maybe some juice, a little cereal?

Small Intestine:  We could try spitting up again.  I think we’re really getting the hang of it.

Large Intestine:  Wake me up when there’s something for me to do.

Large Intestine:  What on earth is she eating this time?

Mouth:  Yesterday she ate what was in the dog’s bowl, and I’m not sure all of it was food.

Large Intestine:  I hate you.

Large Intestine:  How come no one ever invites me to the party?

Small Intestine:  Everybody stop everything, I think we’re gonna hurl!

Stomach:  Now, that’s just careless.  And I see we’re having Pop-Tarts for breakfast again.  One of these days, Metabolism is going to go on strike.

Small Intestine:  Come on, guys!  We’re not that fussy little GI tract we used to be; we’re in our prime!  We can handle anything she throws at us!  Let’s get those digestive juices flowing!  Who’s with me?

Large Intestine:  Whatever.  I think it’s all crap.

Mouth:  Did that Number 7 meal seem off to anyone else?

Stomach:  Don’t ask me.  I’ve been empty for hours, and now suddenly I’m dodging half-chewed chunks of Big Mac and a side of fries I think she swallowed whole!

Large Intestine:  Were the fries at least hot?

Small Intestine:  That’s it!  HUMAN!  HEY!  YEAH, YOU!  LEARN TO CHEW!  AND TRY EATING SOMEWHERE WITHOUT A TAKOUT WINDOW, WHY DON’T YOU?  AND WHILE YOU’RE AT IT, EAT SOME FREAKING LETTUCE ONCE IN A WHILE!  IT’S CALLED “ROUGHAGE,” MORON!

It’s a tough job, being an alimentary canal.  Twenty-somethings, learn from my example and start eating better before your small intestine starts yelling at you.  Oh, and my stomach was right:  Metabolism did go on strike.  Negotiations are ongoing.  That one may take a while.

Incidentally, major kudos to anyone who got my truly awful digestion joke in the beginning.  If you didn’t get it, honestly, don’t try.  It was really bad.

Image, as usual, in the public domain via pixabay.com.

7 thoughts on “If These Intestinal Walls Could Talk”