It doesn’t pay to be a grown-up.

I’ve been thinking that, at some point before I retire, it would be nice to buy a house.  To that end, I recently spoke with a financial advisor (I may be glamorizing his job here a bit–it was just a guy at my bank who agreed to talk to me) and went through my finances with an eye toward getting things in shape, eventually, to own my own home.  He warned me, “This is going to take some belt-tightening,” and I believed him.  My job is more spiritually than financially remunerative.  I just wasn’t quite prepared for how tight that belt was going to have to get.  Here’s the gist:

Of course, federal and state taxes come out of the paycheck before you ever get it.  Then there are all the other automatic payments for things like retirement accounts, flexible spending plans or health savings accounts, student loans, personal savings accounts, and things of that nature.  Then there’s rent (or mortgage, I hope, eventually), utilities, groceries, pantyhose (I need a separate line in my budget for these because I go through so many), household necessities, all the stuff you really do have to have.  Most people also have a car payment or at least an amount for gas; I have taxi money.  There’s whatever other categories your life calls for, like  child care,  medical expenses, pet supplies, property taxes, things along those lines.  Then there’s what you have to put aside for a down payment, and then there’s what’s left.

I’m not kidding, I actually had more pocket-money when I was a kid with an allowance.  It really doesn’t pay to be a grown-up, and I’ve got the spreadsheet to prove it.

It was raining while we were doing this, and it stopped not long after we finished.  I looked out of my window and saw a rainbow that came right near my home.  It was so close, I could actually see the end of the rainbow.  I craned my neck, because it would have been fantastic timing to find a pot of gold just then.  Where do you think the rainbow ended?

In the graveyard next to my apartment building.

I don’t know what to make of that.  I’m completely not just coming up with a cool metaphor to give added dimension and meaning to my blog post.  This really happened.  I actually saw where the rainbow ended, and it ended in a graveyard next to my building.  Is it the death of hope?  A commentary on the ephemeral nature of human lives and dreams?  A message from above that I should just give up now?

And then I thought, maybe that’s just where the rainbow starts. 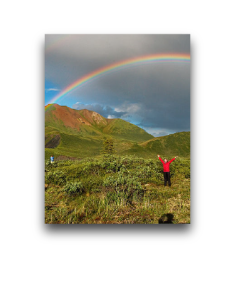 3 thoughts on “Follow That Rainbow! Or, How I Did My Budget”